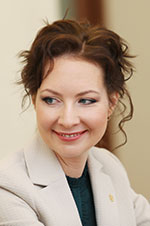 Prof. Avrutina graduated St. Petersburg State University, Faculty of Asian & African Studies, Department of Turkic Philology in 2002. From 2000 to 2006, she taught Turkish to the students of Faculty of Philology and Faculty of Asian & African Studies of St. Petersburg State University. In 2007-2008, studied Turkish literature at the Columbia University Middle East and Asian Languages and Cultures (MEALAC) and studied at the Columbia University School of Continuing Education.

In addition to scientific work, Prof. Avrutina is a literary translator from Turkish into Russian. Among her translations are the novels of the greatest contemporary Turkish writers, such as Orhan Pamuk, Nazim Hikmet, Sabahattin Ali, Bilge Karasu, Ahmed Tanpinar, Zulf Livaneli and others. He is engaged in the popularization of Turkish culture and literature in Russia, as well as the promotion of Russian writers in Turkey. Since 2008, she has been working as a critic and literary columnist with Russian, Turkish and European literary magazines, participating in the jury of literary prizes, co-author of the screenplays. Member of the St. Peterbsurg Writers’ Union. Laureate of the international translation contest for Turkic poetry "Ak Torna" (2012). Laureate of an annual all-Russian literary award, the Yasnaya Polyana Literary Award is that was founded in 2003 by the Leo Tolstoy Museum Estate and Samsung Electronics in the category "Foreign Literature" for the translation of Orhan Pamuk's novel "Straigness in my Mind".