St Petersburg University has held a meeting with the Secretary General of the Silk Road Universities Network Hwang Sung Don, a professor at Hankuk University of Foreign Languages, South Korea.

The Silk-Road Universities Network, SUN is an association of universities located in the countries along the Silk Road. The Network was established in 2015 and today it unites 78 universities from 63 countries of Eurasia.

Professor Hwang spoke in detail about the activities of the university association. The mission of the project is to restore the historical value of the Silk Road, within which great civilisations coexisted for many centuries. Mr Hwang is sure that today, in an age of conflicts and wars, a peaceful future is transcending political, religious and cultural boundaries. According to the originators of the network, the leading role in the process of establishing a dialogue between countries will be played by universities – the concentration of the intellectual potential and energy of young people.

According to Hwang Sung Don, the tasks facing the network are described by the ACE formula: academic, cultural, expedition.

Academic projects combine research programmes and educational exchanges. In particular, the network aims at creating an international map of the new Silk Road, which would be politically neutral and reflect the historical and cultural heritage of all countries. Extra opportunities for teaching internships and international mobility programmes for employees are available for all members.

The cultural side of the work of the association primarily includes projects for students. PHOCOS and WRICOS contests are aimed at finding talent from among young photographers and writers. The winners will receive grants and attend the network assembly, which will be hosted by Ankara in 2019. Mr Hwang Sung Don invited all students of St Petersburg University to take part in the contests. Also, musicians from among students of universities that are members of the network get the opportunity to play in the Silkroadia Phil-Harmonic Orchestra.

The third element of the formula - the expedition - involves trips to the regions of the Silk Road and the territories adjacent to it. Expeditions have already been held in: Southeast Asia – through the territories of Vietnam, Thailand, Cambodia and Malaysia (more than 200 students took part in them); and Central Asia – in Kazakhstan, Uzbekistan and Tajikistan. This year they are planning to visit Mongolia and North China.

One of the ambitious ideas is the joint development of a special course on the history and cultural heritage of the Silk Road. Hwang Sung Don is convinced that this course could become a part of academic programmes in member universities. Sergey Andryushin stressed that such a course could be developed in an online format: St Petersburg University has extensive experience in creating distance learning courses.

Professor Hwang said that one of the principles of the network is to eliminate competition between member universities, and prevent the domination of some countries over others. That is why the quota for entry into the network is five universities per country. Representatives of the network hope that the last, fifth member from Russia will be St Petersburg University.

The association unites universities from completely different regions and even includes universities from the countries of the Middle East (Iran, Oman, Jordan, the UAE) and Northern Europe (Finland). In the future, the network can be entered by countries from North Africa. Among the non-university partners of the association that support its projects are the UN, UNESCO and the QS World University Rankings.

At the end of the meeting, Sergey Andryushin thanked the guest for the visit and said that St Petersburg University will give full and careful consideration to the proposal of the Silk Road Universities Network to join the association. 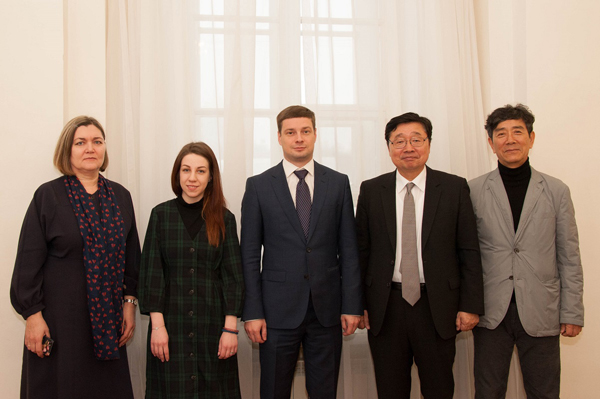