Marina Lavrikova, Senior Vice-Rector for Academic Activities and Teaching Methods of St Petersburg University, emphasised in her welcoming speech that the University values highly traditions and the classical approach to education. At the same time, it is also important for the University to be a modern, rapidly developing institution that meets the expectations of the labour market.

In order to improve the quality assessment of education, St Petersburg University actively involves employers in the academic process. It invites representatives of public authorities, business structures, as well as leading Russian and foreign scientists to cooperate.

“Councils are set up within each academic programme. They make recommendations on a wide range of issues. These include: features of admission to the programme; quality control of academic activities; and conducting state final examinations. At present, the University has more than 140 such councils,” said Marina Lavrikova.

During the meeting, representatives of the Japanese Business Club were invited to join the councils such as the bachelor’s programme “Laws (with advanced study of Japanese language and the law of Japan)”. It was launched in the autumn semester 2018. The University is currently planning to open the academic programme “Economics (with advanced study of the Economy of Japan and the Japanese language)”. This area of study is close to Japanese entrepreneurs, and the University is ready to accept them in the council of this academic programme.

The Japanese Business Club operates under the direction of the Ministry of Foreign Affairs of Japan. It consists of large Japanese companies, in particular the automotive corporations Toyota and Nissan. The Japanese government organization JETRO is managed by the Ministry of Economy, Trade and Industry of Japan. Its task is to promote the development of mutual trade between the Land of the Rising Sun and other countries.

Mr Satake Akihiko said that Japanese companies are actively searching for skilled personnel with knowledge of the Japanese language to work in foreign offices. They will therefore be interested in developing cooperation with St Petersburg University and joining the councils of the University's academic programmes. The General Director of JETRO added that the company is searching for specialists. This is as part of the development of cooperation between Russia and Japan in the area of ​​exchanging highly skilled employees. They even created a special portal for this purpose in 2018. They are also interested in holding joint events with students from St Petersburg University.

Following the meeting, the parties agreed to consider the participation of the Chairman of the Board of Trustees of the Japanese Business Club as the chairman of the council of the academic programme “Laws (with advanced study of Japanese language and the law of Japan)”. They also agreed to invite other members of the organization to participate in this work. It is also planned that its representatives will participate in university career days and open days in "Management" and "Law". 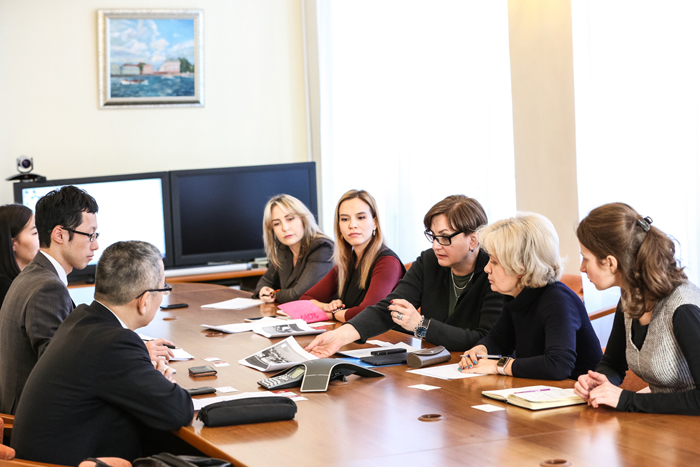