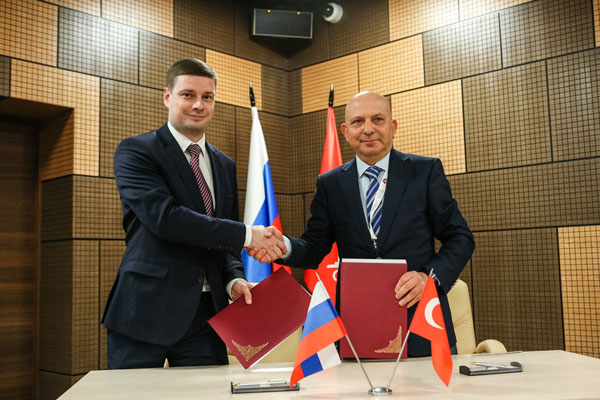 The solemn ceremony took place at the 2nd Rectors' Forum, held as part of the Russian-Turkish public forum. The meeting was attended by representatives of the 36 largest universities of the two countries.

Andrey Maksimov, the Chairman of the Committee of Science and Higher Education of St Petersburg, welcomed the participants of the Rectors’ Forum. ‘We have great prospects for the development of Russian–Turkish relations in the field of science and vocational education. I am confident that today's forum will launch a more dynamic development of the relations between the universities of the Russian Federation, St Petersburg and the Republic of Turkey,’ said Andrey Maksimov. ‘We can work much more actively in the fields of student and academic exchanges, holding major congresses and forums. All this will influence the development of scientific thought, advanced educational technologies and ultimately the development of friendship and mutual understanding between our peoples.’

At the moment, 86 Turkish students are studying at the universities of St Petersburg, which is one of the 30 largest groups of foreign students.

Opening the meeting, Inna Shevchenko, the Rector of Southern Federal University, underlined that currently Russian universities have accumulated substantial experience for organising and developing international cooperation. ‘We are convinced that attention to the forum, which was shown by the universities of Russia and Turkey, is an indicator of the significant interest of our countries in expanding cooperation in science and education. At present, unprecedented measures are being taken to intensify international cooperation and develop the export of educational services both in Russia and in Turkey’, Inna Shevchenko said. ‘By 2023, the number of foreign students is planned to be increased to 200,000 in Turkey – this is slightly less than the number of students who are currently studying in Russia. A twofold increase in the number of foreign students is behind the Russian national projects ‘Education’ and ‘Science’. I think that nowadays leading universities of the city and countries will be able to share their experience in establishing a dialogue.’

Erkan İBİŞ, the Rector of Ankara University, spoke on behalf of the rectors of the Republic of Turkey. In his speech, he stressed how important it is, on the one hand, to accept the process of globalisation and become citizens of the world in order to understand properly its diversity, and on the other hand, to preserve authenticity, its traditions and methods of education. He said that the education system of Turkey is constantly being reformed in order to become more open and universal and to create active cooperation with universities around the world. Turkey is integrated into the education system of the European Union, and is a member state of the Bologna process. There are 206 universities in the Republic of Turkey, 110 of which are state-owned. Almost all universities have English-language academic programmes. The number of foreign students in the country is therefore rapidly increasing. Erkan İBİŞ told the participants of the Rectors’ Forum about plans to strengthen Russian–Turkish cooperation in science and education. However, he offered to start with simple projects that will serve as a foundation for further work.

During the meeting, Sergey Andryushin, the Deputy Rector for International Affairs of St Petersburg University, signed cooperation agreements with the leaders of Ankara University and Boğaziçi University – the leading universities of the Republic of Turkey. ‘We are interested in developing cooperation with Turkish universities in various areas – humanitarian and natural science, as well as in creating joint projects, such as research centres and laboratories,’ said Sergey Andryushin. ‘First of all, we will focus on the exchange of students and teachers, since university students and staff show great interest in this area.’